Can Acupuncture or Acupressure help with Prebirth or Labor Induction?

Women often seek medication-free ways to begin labor so they may avoid the potential risks of a medical induction. Many methods of unmedicated “induction” have been explored, including nipple stimulation, walking, intercourse, castor oil and many more (see resources section at the bottom of this page). This section will focus on the evidence around using acupuncture and acupressure for labor preparation and labor induction.

Of 22 studies on acupuncture or acupressure examined in a 2017 Cochrane Research Review (1), a variety of methods were used and there was a lot of variation in things like which acupuncture points were needled, the number of treatments given, at what point in pregnancy treatments began and what type of acupuncture was given (traditional or traditional with electrostimulation). Additionally, not all of the studies kept track of the same outcomes, such as rates of cesarean section, birth outcomes or dilation of the cervix. This made it more difficult for the researchers to accurately pool and analyze all the data.

There is some promising evidence that acupuncture & acupressure may improve the readiness of the cervix for labor and the Bishop Score. 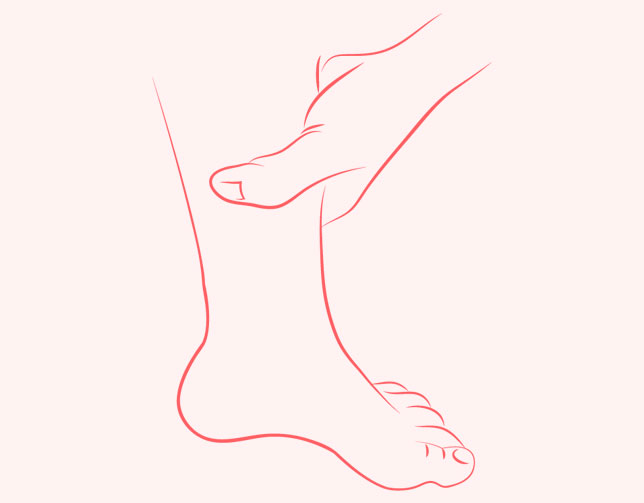 Background: What is a Bishop Score?

A Bishop Score is used by professionals (OB’s and midwives) to determine how receptive someone may be to induction (see this link for images and more explanation). It includes assessment of the cervical dilation and effacement, the baby’s station in the pelvis, and the consistency and position of the cervix. Each one of these areas is “scored”; these numbers are then combined for a total score. A total score of 7 or more is generally thought to lead to greater likelihood of a vaginal birth after induction. 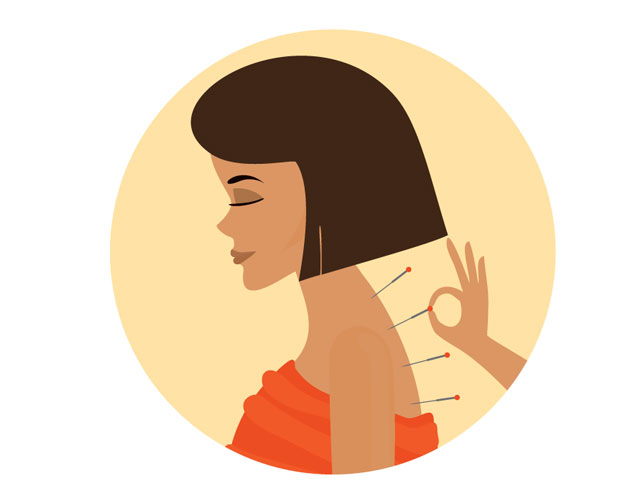 Women often seek medication-free ways to begin labor so they may avoid the potential risks of a medical induction. Many methods of unmedicated “induction” have been explored, including nipple stimulation, walking, intercourse, castor oil and many more. For reliable resources on other methods, see the resources section at the bottom of this page.

Curtis et al (15) proposed possible ways that acupuncture late in pregnancy might lead to cervical changes, summarizing that “It seems possible... that segmental acupuncture at the pelvic level could produce peripheral neurological and vasomotor effects on the cervix, uterus, and even the fetus.”

As some of this information is based on theory, more research is needed which measures changes in these hormones and neurotransmitters. 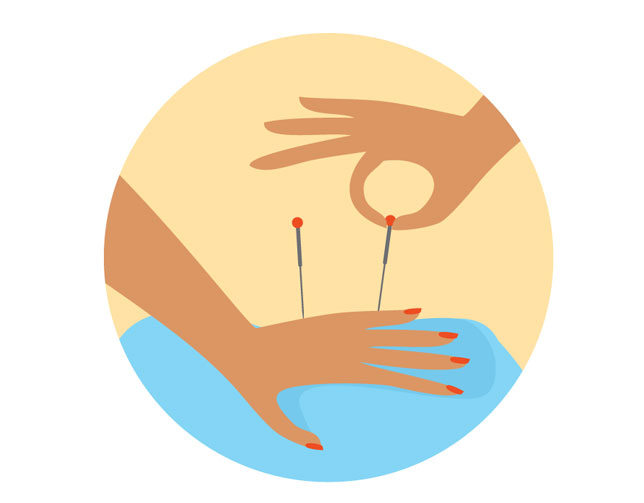 Of the 22 studies in the Cochrane Research Review, 6 looked at the effect of acupuncture on either a woman’s Bishop’s Score or the amount of cervical dilation alone. 5 of these studies showed that acupuncture did increase the readiness of the cervix for labor, and the Cochrane Review concluded that overall, acupuncture showed some benefit in improving cervical maturity.

The 5 studies that found a change in the Bishop Score or cervical dilation after acupuncture had a few things in common- in all but one study, women had 3 or more acupuncture treatments, and all point protocols included the point Sp 6 which is thought to influence cervical ripening (2, 3, 4, 5, 7). It is interesting to note that although the study by Gribel et al stated that no difference was found, the comparator group had misoprostol, a medication used to influence cervical readiness for labor. Acupuncture in this particular study resulted in the same cervical changes as the medication, but women having acupuncture had a lower rate of c-section, higher reported patient satisfaction and fewer obstetric complications despite having longer labors. These women had electroacupuncture for 30 minutes every 7 hours (5). Although the number of treatments these women received varied between 1-3 times, it is possible that the increased frequency or the added stimulation to the points (from electroacupuncture) resulted in more cervical changes.

In the one study in which no changes in Bishop Score were found after having acupuncture, the women had only two treatments (once daily in the 2 days before a planned induction (6)). This is not a schedule of treatments that is generally recommended by acupuncturists.

It might! We need more research to say for sure. One study in the Cochrane Review (8) looked at the effect of acupressure on Bishop Score. These women were all 39-41 weeks pregnant and either performed acupressure on themselves, had it performed by a researcher or had usual care. Although all groups had increased cervical dilation, the groups getting acupressure had significantly greater improvements in their Bishop Scores at 48 hours after treatment began and upon presentation to the hospital. In this study’s protocol, acupressure was again applied to the point Spleen 6 intermittently for 20 minutes at a time, once daily. Your acupuncturist can guide you in correctly locating this point.

Two other studies (9, 10) on acupressure which showed a low risk of bias did not look at Bishop Scores. These studies showed no change in any other outcomes examined, including onset of labor, oxytocin use, infant outcome or whether there was a vaginal or cesarean delivery. A 2015 systematic review of 7 studies by Mollart et al (14) concluded that acupressure may reduce the duration of the first stage of labor but that there was insufficient evidence to make firm recommendations.

Although the first trial (8) did show a high or unclear risk of bias across all categories, it tells us that there is the potential for an increase in Bishop Score after acupressure stimulation. We need more trials that specifically look at acupressure and Bishops Score that are of lower risk of bias.

Notes on Clinical Relevance of These Effects

It should be noted that although these studies did find an improved Bishop Score and cervical maturity, the resulting improvements we would expect were not found. The idea of a Bishop Score is that the higher the score, the more likely it is that the labor induction will be successful or that the woman will spontaneously go into labor on her own. No difference was found in c-section rates, oxytocin augmentation or the need for other medications to induce labor. It may be that even though the change in Bishop Score was statistically significant, it was not enough to prove to be clinically relevant. This means that it was not enough to lead to a change in birth outcomes. I feel that a different treatment schedule which may lead to clinically significant changes should be further investigated, and is described in the following paragraphs.

Author’s Note: I would like to thank Debra Betts for her guidance and invaluable insight in analyzing the research in this section.

Acupuncturist and researcher Debra Betts has written articles and co-authored studies describing a theoretical framework for pre-birth acupuncture treatments which is supported by the experience of midwives and other acupuncturists as well as data on labor and birth outcomes (12, 13). She has found that approaching pre-birth treatments with a singular focus on trying to induce contractions in women near or past their due dates is both problematic and ineffective, stating that “I realized in hindsight that attempts to stimulate contractions in women facing a medical induction were of limited value if the underlying reason for delayed labor had not been addressed” (11). She recommends an emphasis on acupuncture and acupressure for optimizing baby’s position, offering symptomatic relief from physical discomforts (lower back and pelvic pain or fatigue, for example) and aiding in stress reduction and emotional readiness. It is only after these three things have been achieved (and ideally the Bishop Score indicates readiness for labor) should acupuncturists try to stimulate contractions (11).

Betts and Lennox conducted a naturalistic observational study in which they tracked the labor and birth outcomes of 169 New Zealand women who had this more comprehensive style of pre-birth acupuncture (12). The acupuncture treatments were administered weekly beginning at weeks 36 or 37 by their midwives (14 midwives participated in the study), and outcomes were compared to those who had no acupuncture but were also under midwifery-only care in the same area in New Zealand. They reported a 35% reduction in the need for inductions (43% reduction for first time moms), a 31% decrease in epidural use, a 32% decrease in emergency c-sections and a 9% increase in normal vaginal birth. Although there are limitations to the design of an observational study, the findings suggest that this model of acupuncture care may show more benefit than treatments with the goal of inducing labor.

Many of the studies analyzed in the Cochrane Research review used a treatment approach which skipped over points for labor readiness and went straight to initiating contractions. I would love to see more studies utilizing treatment provided on a schedule that would be considered clinically relevant by acupuncturists as described by Debra Betts. Using comparative effectiveness research techniques and a pragmatic trial design may prove to be better suited to determine the benefit this type of approach could provide.

Evidence Based Birth: Evidence on Pineapple and Sex