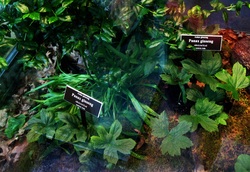 About a month ago I had the pleasure of attending the “Wild Medicine” Exhibition at the New York Botanical Gardens (on view through Sept 8th). Plants from around the world which are also used as medicine (in both ancient and modern times) are featured, including an Italian Renaissance Herb Garden and many other plants. Many of the plants in the exhibition are traditionally used as Chinese Medicine Herbal remedies.

It is important to keep in mind that just because something is natural or herbal does not make it safe. You should only take herbs such as these under the guidance of a trained and licensed practitioner. To complicate things even more, did you know that herbal medicine is not regulated in New York State? Anyone can say they are an herbalist. Before seeking help from someone claiming to be an herbalist, you MUST specifically ask what training someone has received, and what certifications and qualifications they have earned. Otherwise, you may be getting herbal advice from someone who learned all they know from friends and online blogs. For example, acupuncturists should have passed an herbal medicine exam and received certification by the NCCAOM after taking the required courses.

In Chinese Medicine (unlike western herbal practice), herbs aren’t normally used alone, they are used in combination with other herbs. The herbs are traditionally cooked together into a tea, and, prepared this way, take on new and complimentary functions. The herbs work better and are more balanced together than alone.

Ephedra (Ma Huang): Ephedra has a sad story! It was banned for sale in the US in 2004 after many cases of athletes using it as a performance-enhancing drug and after side-effects were widely reported after taking it as a weight loss aid. In both these cases, the herb was concentrated in a lab and sold in pill form. Ephedra was used safely in TCM for centuries as an anti-asthma herb, an herb for treating some types of the common cold, and for reducing swelling of the extremities (edema) by increasing urination. It was used in much lower dosages and never for long periods of time. Unfortunately now due to the misuse of Ephedra, trained herbalists in the U.S. are unable to give it to patients who would benefit.

Chinese Ginseng (Ren Shen): The roots of the Ginseng plant are widely known as an ingredient in energy supplements, and is considered an adaptogen. Adaptogens are herbs that increase energy and immunity, and strengthen the cardiovascular and nervous systems. Chinese Ginseng has been used for centuries and unfortunately overharvesting has led to a shortage. True Chinese Ginseng is now quite expensive, so the more abundant American Ginseng is more commonly used, even though it is less potent.

Herbs as Food: The Medicine Cabinet in Your Pantry

These are just a few of the plants included in Chinese Medicine’s Materia Medica (herb directory). They are combined with other plants and used medicinally, but can also be used alone for health reasons! Here are a few examples:

Mint (Bo He): Mint is fantastic for reducing intestinal cramping and decreasing gas and bloating. It also cools and clears the eyes and head and soothes the throat. It’s also a great stress relieving tea and is helpful for symptoms of summertime colds.

Goji Berries (Gou Qi Zi): These have become easy to find in health food stores over the last few years. They nourish the blood, improve vision, nourish the body’s fluids. Don’t eat too many at a time; these can be hard to digest.

Black Sesame Seeds (Hei Zhi Ma): Like Honey, these are also good for moistening the intestines in constipation. Black sesame seeds also nourish the blood and yin (fluids of the body).